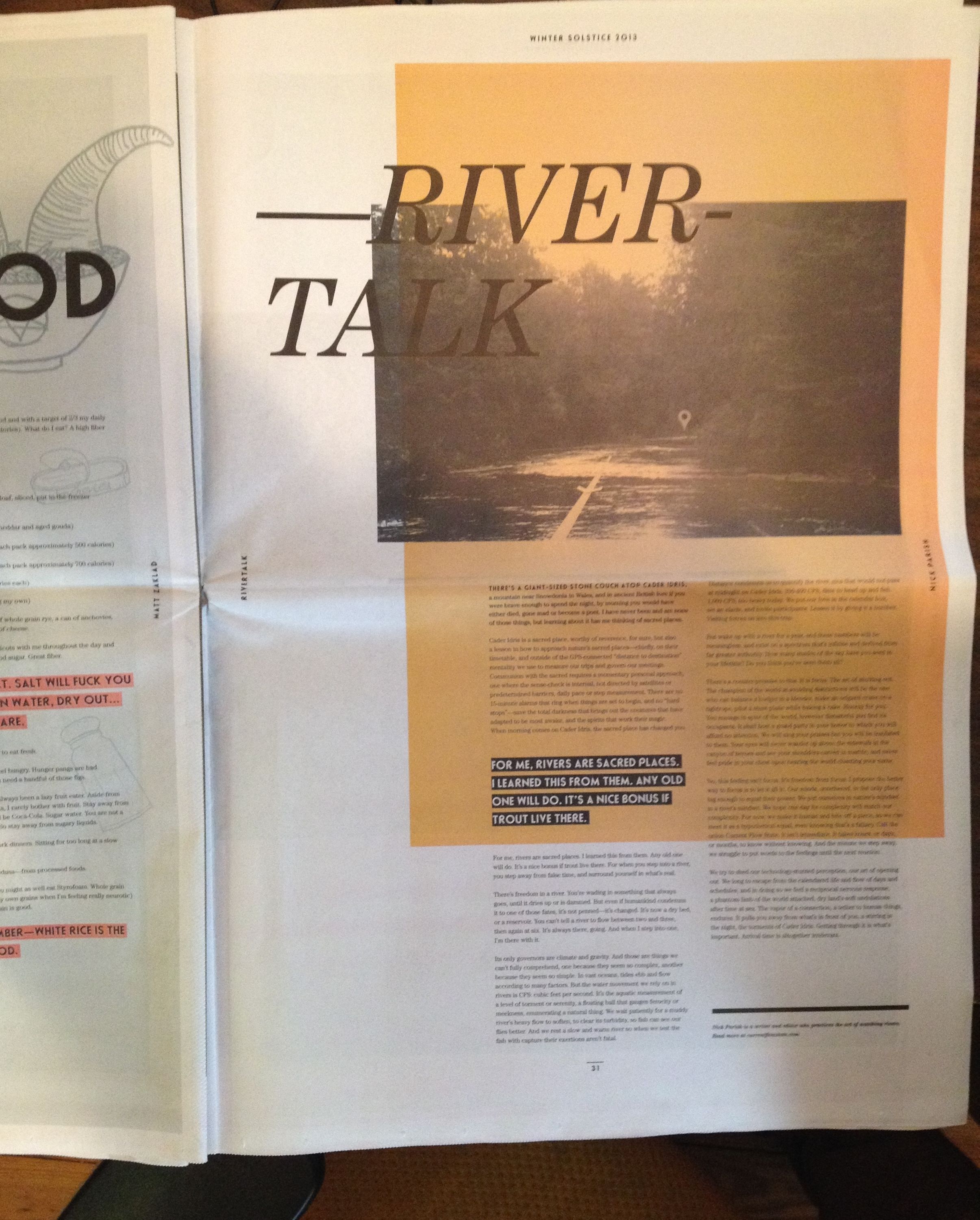 A few months ago my buddy Michael Ventura asked me to write an essay for his new publication, La Petit Mort. Just last week I got the glorious newsprint edition and found my piece, “River Talk,” reproduced faithfully.

The design looks great, the illustration I cooked up wound up translating well visually, and I’m really grateful to have been involved and appearing alongside articles ranging from an ethical look at slum tourism to a primer on how to eat clean while traveling. 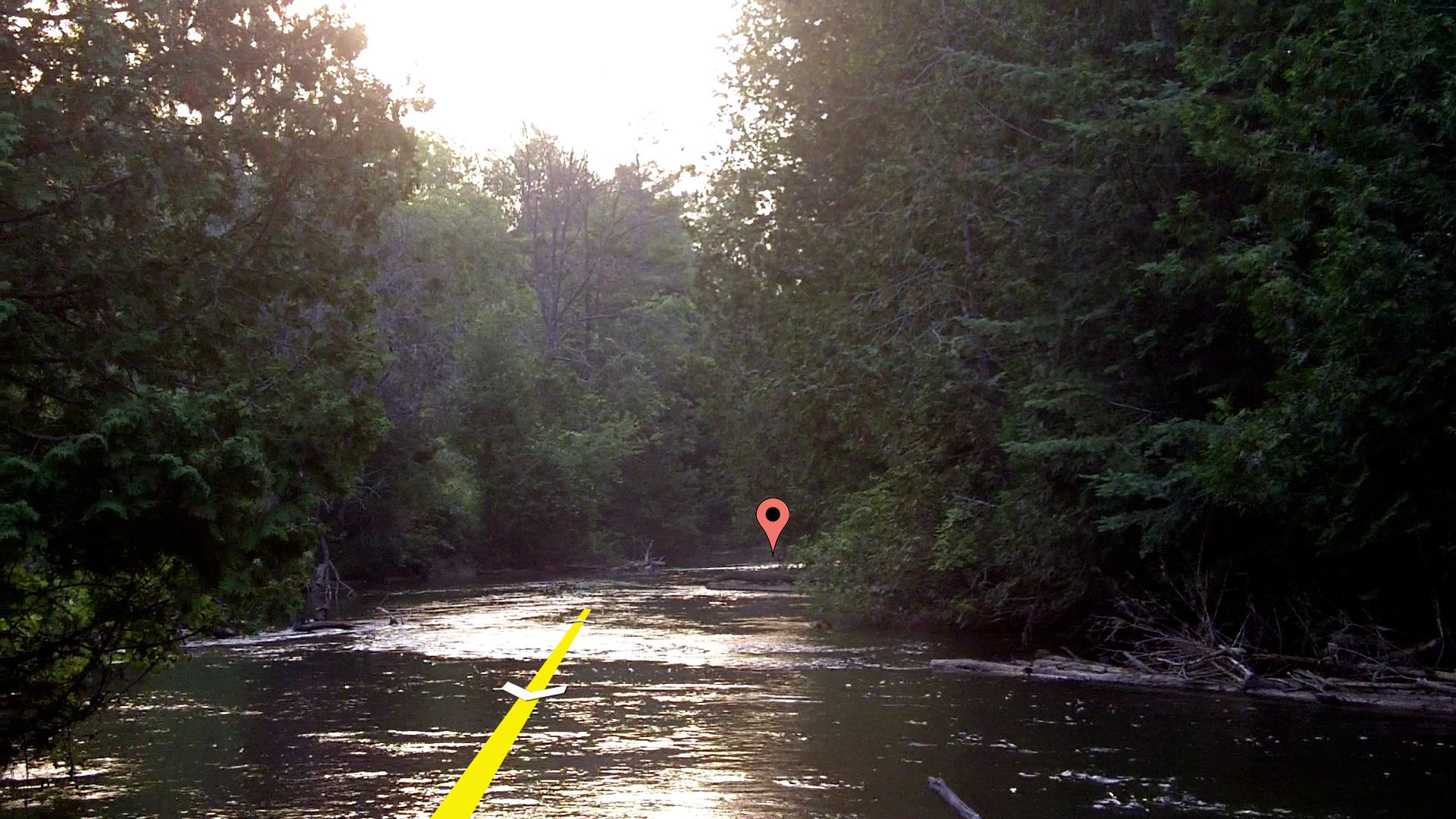 There’s a giant-sized stone couch atop Cader Idris, a mountain near Snowdonia, in Wales, and in ancient British lore if you were brave enough to spend the night, in the morning you’d have become either dead, mad or a poet. I’ve never been and am neither of those things, but learning about it recently made me think about sacred places.

Cader Idris is a sacred place, worthy of reverence, for sure, and also a lesson in how to approach nature’s sacred places. Chiefly, on their timetable. And outside of the GPS-connected ‘distance to destination’ we use to measure our trips and forty-minute slots that govern our meetings. Communion with the sacred requires a momentary, personal approach, an approach where the sense-check is internal, not directed by satellites or predetermined barriers, daily pace or step measurement. There is no 15-minute alarm that rings when things are set to begin, and no ‘hard stop’ save the total darkness that brings out creatures that have adapted to be most awake, and the spirits that work their magic. And, when morning comes on Cader Idris, the sacred place has changed you.

For me, a river is a sacred place. I learned this from them. Any old one will do. It’s a nice bonus if trout live there. For when you step into a river, you step away from false time, and surround yourself in what’s real.

There’s freedom in a river. You’re wading in something that always goes, until it dries up or is dammed. But even if humankind condemns it to one of those fates, it’s not penned—it’s changed. It’s now a dry bed, or a reservoir. You can’t tell a river to flow between two and three, then again at six. It’s always there, going. And when I step into one, I’m there with it.

Its only governors are climate and gravity. And those are things we can’t fully comprehend, one because it seems so complex, one because it seems so simple. In vast oceans, tides ebb and flow according to many factors. But the water movement we rely on in rivers is CFS: the cubic feet per second. It’s the aquatic measurement of a level of torment or serenity, a floating ball that gauges ferocity or meekness, enumerates a natural thing. We wait patiently for a muddy river’s heavy flow to soften, to clear its turbidity, so fish can see our flies better. And we rest a slow and warm river so when we test the fish with capture their exertions aren’t fatal.

Distance condemns us to quantify the river, sins that would not pass at midnight on Cader Idris. 350-400 CFS, time to head up and fish. 1,000 CFS, too heavy today. We put our love in the calendar box, set an alarm, invite participants. Lessen it by giving it a number. Visiting forces us into this trap.

But wake up with a river for a year, and these number will be meaningless, and exist on a spectrum that’s infinite and derived from far greater authority. How many shades of the sky have you seen in your lifetime? Do you think you’ve seen them all?

nowhere2 192x300 River Talk: A ManifestoThere’s a counter-premise to this. It is focus. The art of shutting out. The champion of the world at avoiding distractions will be the one who can balance a budget in a blender, make an origami crane on a tightrope, pilot a stunt plane while baking a cake. Hooray for you. You manage in spite of the world, however distasteful you find its occupants. It shall host a grand party in your honor to which you will afford no attention. We will sing your praises but you will be insulated to them. Your eyes will never wander up above the sidewalk in the canyon of heroes and see your shoulders carved in marble, and never feel pride in your chest upon hearing the world chanting your name.

No, this feeling isn’t focus. It’s freedom from focus. I propose the better way to focus is to let it all in. Our minds, untethered, in the only place big enough to equal their power. We put ourselves in nature’s mindset. In a river’s mindset. We hope one day its complexity will match our complexity. For now, we make it human, and bite off a piece, so we can meet it as a hypothetical equal, even knowing that’s a fallacy. Call the union Current Flow State. It isn’t immediate. It takes hours, or days, or months, to know without knowing. And the minute we step away, we struggle to put words to the feelings until the next reunion.

We try to shed our technology-stunted perception, our art of opening out. We long to escape from the the calendared life and flow of days and schedules, and in doing so we feel a reciprocal nervous response, a phantom limb of the world attached, dry land’s soft undulations after time at sea. The vapors of a connection, a tether to human things, endures. It pulls you away from what’s in front of you, a stirring in the night, the torments of Cader Idris. Getting through it is what’s important. Arrival time is altogether irrelevant. 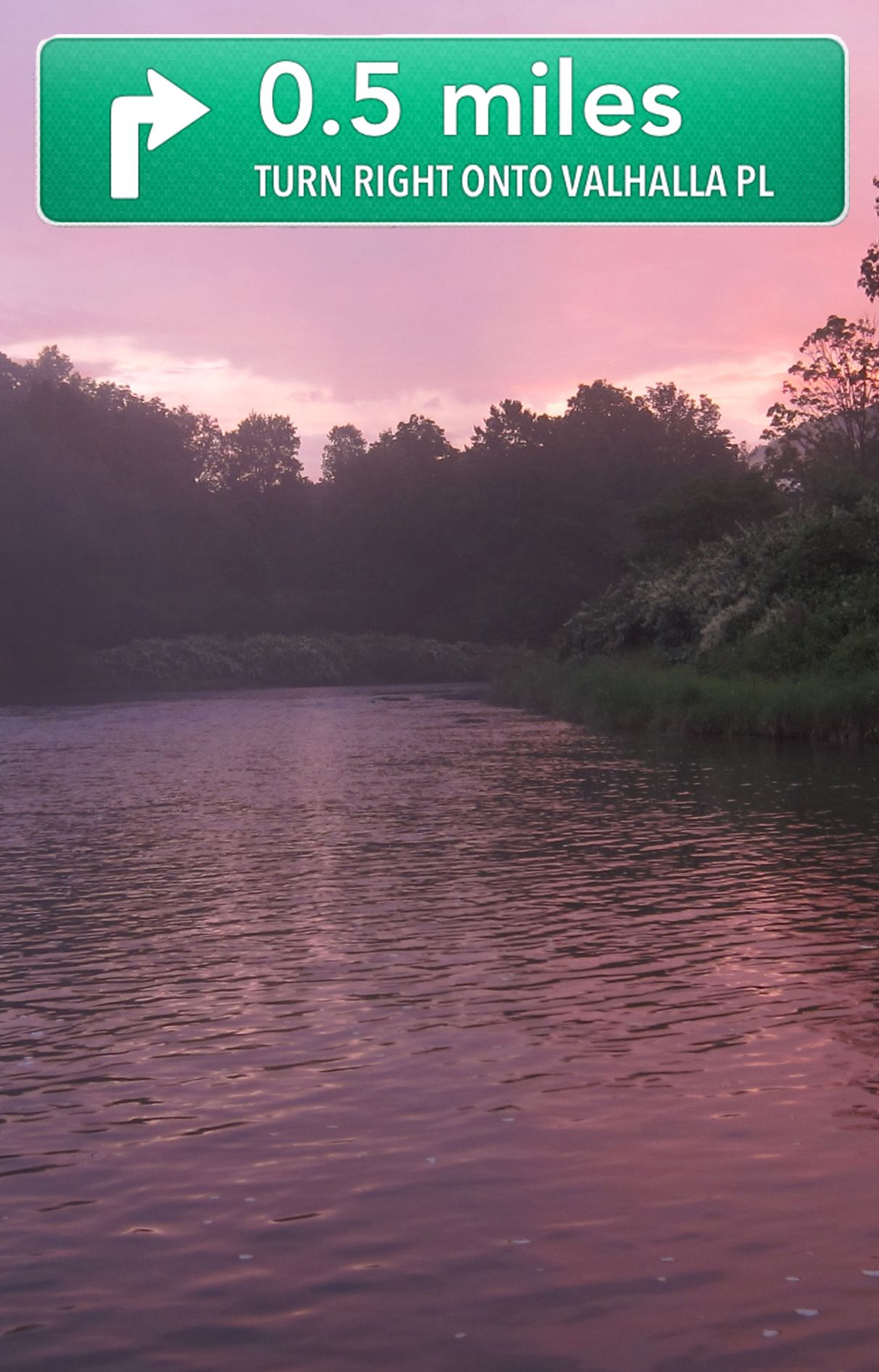