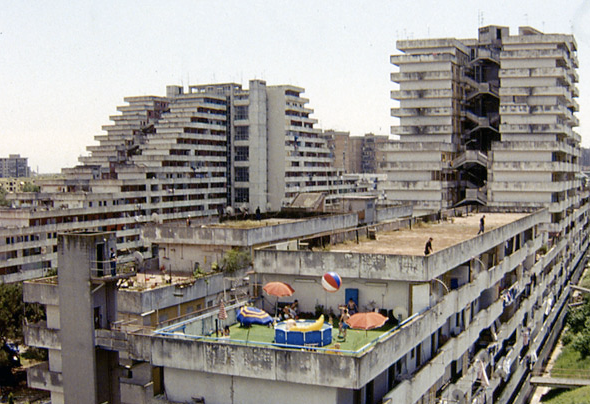 I’ve been anticipating the movie adaptation of Roberto Saviano’s landmark piece of journalism, Gomorrah, since I finished the book about a year ago and proceeded to recommend it to anyone who’d listen. Unfortunately, while it’s a good enough movie by itself, compared to the book it falls short.

First, a word or two on the book. Saviano, a native of the Naples area, lived and breathed the Camorra, the network of clans of organized criminals growing up, and after twenty-something years had enough and wrote a blow-by-blow account of all the different ways it infects the region, from its fashion output to the mozzarella it eats.  Saviano, who narrates the book while hopping from murder scene to murder scene on his scooter and detailing his own family’s determined path around the muck, published the work to the dual accolades of it becoming the most-requested tome in the Italian prison system as well as drawing death threats from the clans whose foibles and excesses it chronicles. And it made him a very rich, well known (both deservedly so) man, at the price of his own safety and freedom–a true commitment to the cause.

The movie adaptation follows a half-dozen different narratives, all part of Saviano’s story, switching between the different arcs. The tailor is under pressure to churn out designer dresses at his sweatshop. The young graduate joins an old hand at the toxic waste dumping business. A tender grocery delivery boy rises in the ranks of the clan. Two cowboys try their hand at existing outside of the system and being outlaws among outlaws. The clan’s welfare dude distributes thick bundles of Euros to wives whose husbands are in the can.

In the book, the central character is Saviano, his relationship and repudiation of this terror that’s destroyed his country and is a scourge on Europe. While he gives in-depth history of the clans and cites dozens of jarring statistics and items of courtroom testimony eventually it all comes back to him. The movie, however, takes these mini-narratives and places them all in a sort of dilapidated project-type area (seen above) where the junkies, the kids, the money man all prowl around. While there’s strength in the crumbling neighborhood epic, taking the mini ecosystem half of the individual narratives center around and making them interrelate gives you something falling short of La Haine. The other three prowl around on their own and reach a violent denouement suggesting some balance or restoration of order before the screen goes dark and cites a few statistics of medium impact (such as, one person is killed every three days in the clan areas).

Technically, at its worst, the film’s pacing feels like a made-for-TV movie, with overslow shots juiced for maximum cringe value. There are only a few notable gangsters in the movie, but dozens of colorful characters, ruthless beyond rationalization, in the book. The film’s images are shocking, but are nothing compared to the brutality described by an indignant Saviano.

That’s the film’s biggest failing–it’s inability to capture the outrage central for any impartial observer (channeled by Saviano) and contrast it with the die-and-let-die mentality that is shown to be pervasive in the area.

If you’re interested in seeing the film, pick up the book first. You’ll finish it in three days and get much more from the experience. It’s an old saw, but in this case the book is far better than the movie.