I wrote this in May 2011 for the Cannes Lions Daily magazine; they wanted a view from the US, as they’ve asked me to write before. It had fallen through the cracks, but I’ve been hearing more and more ‘digital downtime’ talk lately and have only seen a few smaller brands step up and advocate for this. Maybe more on them in the future.

A new role for Rolls in real-time world

Amid all the noise of this always-on world, sometimes the best approach a brand can take is to find what its strong, silent side looks like, says Nick Parish, North American editor, Contagious

As ever in Cannes, great work will be given its due this week. Much of it will be, in some sense, immersive. But immersion is changing. Emotionally resonant web browser-based efforts, such as Cyber Grand Prix winner The Wilderness Downtown, an online music video for the Arcade Fire, executed by the fast-moving collaborative set growing around the Google Creative Lab, are supplanting epic TV commercials as the premier medium for mind-boggling communication.

At the same time, new technology is changing how we define advertising. TBWA’s Projeqt, developed on a brief to refine its online presence, is becoming a platform for creative minds across many disciplines, not just something that communicates TBWA’s effectiveness at making a website.

But one of the most interesting categories is the work attempting to dip its toe in the constant flow of sharing, the bits we all pass along. Real- time marketing is what it’s being called, and most look to Old Spice’s Responses work, which has also won a Cyber Grand Prix at the Festival. But in many cases real-time efforts are little more than interruption and couponing. Smart brands will be the ones that don’t just talk but listen, and are able to make sense of what people are saying, unprompted by another form of marketing intrusion.

At 60mph, the loudest sound in David Ogilvy’s Rolls-Royce was the ticking clock. But today the only brands offering respite as a positioning are those positioned as an escape from physical labour, or housework. Not the sort of chatter many modern urban dwellers find themselves inside. In that sense, Ogilvy’s line has ripened with age. Your Rolls will insulate you from the loud, irritating universe, so you can think your princely thoughts and build your mental empires. We could all use moments like these. But who will give them to us?

Some think real-time marketing means brands should be at our beck and call, popping up when we want, to prop us up if we’re falling behind, to pop by with that pallet of Wheat Thins and give us our minutes of web video fame for a tweet. It most certainly can be an effective way to engage, build a personality for your brand, and help you become an active player in a bubbling community, in Wheat Thins’ case especially so.

But, as the discipline and channels mature, brands will be measured more by how they listen than by how they talk. Surprisingly, the disparity between talking and listening is massive. Just 2% of companies, according to SAS, track what’s said about them on Twitter.

Sometimes it’s important to be actively quiet. On a recent episode of Harvard Business School’s Ideacast podcast, Sherry Turkle from MIT talked about her newest book, Alone Together: Why We Expect More From Technology And Less From Each Other. Turkle argues that we’re spending our time communicating, rather than creating. Multitasking, Turkle asserts, is boosting the former at the latter’s expense. People’s work is becoming communication — e-mail, chat, social-network engagement. ‘As we ramp up the volume and velocity, we begin to ask each other questions that we know will get an immediate response, and we begin to give responses so we can give immediately,’ she says. ‘So we’re dumbing down the questions we ask and the responses we give in order to gratify this need for volume and velocity. It’s as though the pace becomes more important than the quality of the response.’ Remember the recessionary mantra, parroted incessantly by media companies and publishers, usually through their starving- for-ad-dollars channels? In times of trouble, spend more, boost volume, otherwise you’re forgotten. In many ways, that has been twisted and misapplied, creating a pragmatic media agenda focused on being everywhere.

We’ve just seen Pepsi’s flagship product take a direct hit and cede its second-place rank to Diet Coke after abandoning brand advertising for its cause-marketing effort, the Pepsi Refresh Project. While that probably isn’t entirely due to marketing changes, those who were the loudest champions of Pepsi’s laudable efforts will tell you it shouldn’t have been pursued at the expense of brand advertising, but in addition.

Every marketer will tell you that if you’re not talking, or advertising, you’re losing relevance. But this rule is being eroded by the ability to flood the places brands are placing content, with little or no incremental increase in spending. ‘Constantly talking isn’t necessarily communicating,’ says Charlie Kaufman, through Jim Carrey’s Joel in Eternal Sunshine Of The Spotless Mind.

Remember, the negative spaces your brand defines for its group are just as important as the positive. The ‘negative space’ role is reminiscent of Add Art, a Firefox plug-in which turns display advertising into art. How about a plug-in to do what Instapaper and Readability have done for publishers, offering space and time to read something later, wrapped in a calm, new, page-like package? The Karmatech concept, from students at Hyper Island for Swedish apparel brand WeSC, brings a near-field connection to a shoe, allowing wearers to step their way to social-media updates and interactions. Imagine a near-field ‘I’m open to offers’ or ‘Leave me alone’ concept, where part of the utility a brand offers is insulating people and guarding their free time. Rolls- Royce could register on Twitter and give away a Phantom to some lucky tweeter, gaining followers to rival Charlie Sheen’s rapid ascent. But it would be more interesting to think of how the brand could bring that silent interior to the real-time web. 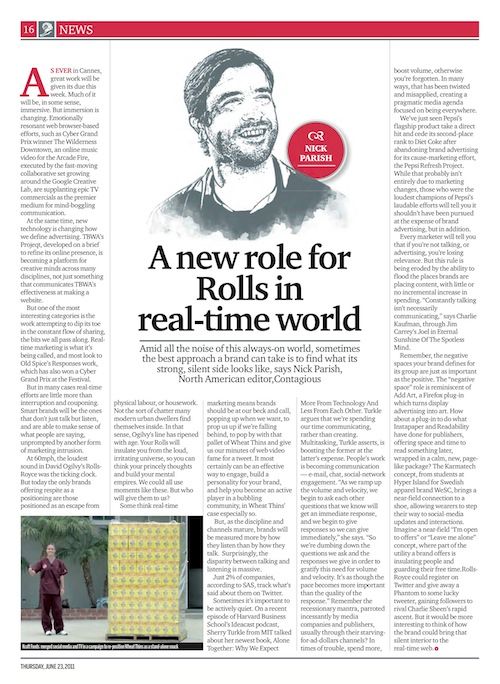