Of Barack and Burger King 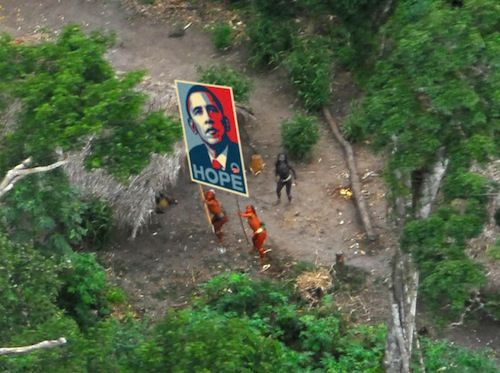 Hope in the Jungle

Early last month, as the historic nature of our presidential election set in and the national night light grew a little brighter, images and stories of people celebrating all over the globe flooded in. I got to wondering.

How many people around the world DON’T know Barack Obama was elected president of the United States?

Finding out who’s remote enough to miss big news was not as easy as I’d hoped. Turns out, the fellows pictured above in our photo composite above aren’t the only ones cut off from regular news, despite a prevalence of communications methods and information dissemination capabilities unheralded in the history of human civilization.

Some groups, like scientific surveys in our far reaches, may make contact weekly or monthly; they’ll eventually hear. Some, such as the religious devout, are cloistered from such information and may not have access. Would a monk who’s granted ten minutes of contact with an outsider once a year ask for current events updates, or just look for a dump of monastery-relevant information? Some, exceedingly rural peasants on the other side of the globe in China, for example, probably concentrate what attention they can spare on local news, things that affect them more directly. I wouldn’t count, for example, a Russian living in Arizona who was unable to speak English among those that we’ll call Newsless, though–context clues speak volumes. And any social contact, however small, goes a long way.

It seems like you can classify the newsless into a few different groups.

I’d call The Removed those living in North Korea or other repressive or dysfunctional areas, like the four scoring in the 90s on the very bottom of this list. In fact, North Korea’s state media website has over a thousand mentions of Bush but not a single Barack Obama reference. Together with Eritrea, Turkmenistan and Burma, that’s around 80 million people

For our purposes The Indigenous are those whose traditional cultures aren’t concerned with matters of media, however large or small. Tiny tribes, nomads, people speaking rapidly dying languages–you’d imagine information like the Senator’s triumph has no bearing in their lives, no relevance or no way

of making it through the filter of translation. The International Work Group for Indigenous Affairs estimates at least 350 million to be of their ilk.

The Remote are people who, socially, belong to an established ethnic group that has developed its own media yet are out of radio range, without satellite TV, etc. The largest majority are probably simply

living in places that are extraordinarily impoverished. I’d count cloistered religious and the

willfully ignorant among them

Remotes are probably the most difficult to classify, and it doesn’t look like too much work has been put into it. However, there are some interesting surprises. Such as, household television penetration in China is 95%. That leaves some 66,000,000, give or take, “media-dark,” a term the people who study this stuff have applied, mostly to the Indian subcontinent. (Like Bangladesh, where, as Shahab Enam Khan of Jahangirnagar University estimates “28.5 percent of all Bangladeshis have no access to regular media.”) That’s 37.5 million people. Unfortunately Mr. Khan’s terminology hasn’t been extended wholly to other nation-states; it’s tough to figure out what to call the extra-media, or whatever you’d like to term people like them. Another interesting component to this is Africa. Turns out, Vijay Mahajan’s Africa Rising says the continent isn’t media dark, as many would believe. Given the particular gravity to the Obama news for all Africans, that one of her sons has ascended to such heights, it’d be safe to rank Africa higher in this instance than you normally would for news from the States.

So, a really, really rough number, based mainly on indigenous populations and The Removed would give you around 430 million; adding the figures we see for China and Bangladesh, the former probably fuzzier  gives you just over half a billion, 13% of the world’s population. Despite personally wanting the Hope Dope to spread to as many possible and the whole world to know about what’s happened here, in my gut it seems like a more accurate measure would be closer to 30%. If you’ve got any leads or know of anyone who’s studied stuff like this with some degree of knowledge and rigor, please speak up.

At any rate, it wasn’t too surprising to see the large majority of information available on the web, studies and such, were conducted by advertising entities. As in, let’s figure out how many people in the world aren’t being advertised to so we can get them buying the right kind of toothpaste.

Speaking of advertising involving folks not normally invited to the party, Burger King’s forthcoming Whopper Virgins stunt campaign (a taste test among people “who have no word for burger”) puts a crass point on all of this thought, for me. I’m glad a few have already voiced their objections, however muddled they seem.

It’s poignant that everyone seems to agree this is “wrong”, but telling they can’t explain exactly why. Maybe that’s why no one spoke up against this during the entire costly production process–they simply didn’t have the words beyond “Hey, guys, wait–is this right?”

Well, it feels wrong largely because we’ve long since realized the idea of a Noble Savage is outmoded and incorrect. In the early 1700’s Anthony Ashley-Cooper, 3rd Earl of Shaftesbury in Soliloquy, or Advice to an Author wrote would-be authors should look for the “simplicity of manners, and innocence of behaviour, which has been often known among mere savages; ere they were corrupted by our commerce.” That’s precisely what Crispin, Porter + Bogusky is going for in this; they’re looking for an uncorrupted mouth to taste the product. Problem is, this doctrine, that those untouched and unstricken by our society are somehow in a vaunted moral position is in the very least entirely incorrect, and at worst the soft racism of consumer culture. 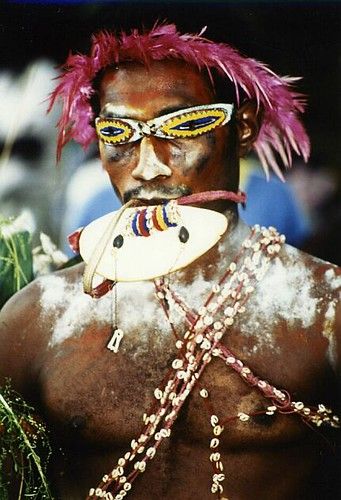 ‘Sir, may I recommend the 1989 Leflaive Chevalier Montrachet?’

Someone who’s never had a burger doesn’t make a better judge of a burger. Imagine if you’d asked a member of the Hagahai tribe from Papua New Guinea to choose your wines at Per Se. The gentlemen of Village X who’ve been fed on a diet far from fast food have no compass by which to judge the quality of a Big Mac or Whopper. Plain and simple. Conceivably that leaves coercion and selective editing as the primary persuasive forces in a situation like this.

Either way, like the GOP, things like this serve to “energize the base”–BK’s target young male demographic, which will actively comment on blogs and vent adolescent frustration in the form of abusive comments (eg “BK rulez fuk u hippy fagets”) as the most vile element of social media. And, of course, the more brain time we devote to this, and the bigger piece of the newshole your local telecast gives it,  the more we’re wondering where the closest Whopper depot is for some flame-broiled deliciousness.