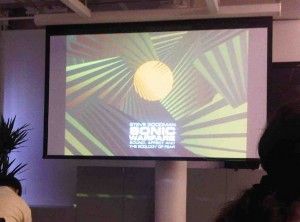 With a flyer boasting quotes from both J.G. Ballard and Colonel Kilgore of Apocalypse Now, by the time my chum Luis and I arrived at NYU a few weeks back for a special lecture we knew we’d be in for an interesting discussion.

Steve Goodman, aka Kode9, dubstep producer and owner/chief curator of the massively great Hyperdub record label, was talking about his new book Sonic Warfare: Sound, Affect, and the Ecology of Fear. (MIT Press)

Introduced as a “rogue academic” and member of the Cybernetic Culture Research Unit, it wasn’t immediately clear if the talk was going to be highly abstract or grounded, but it turned out the latter–lucid, well researched and informative. Here are some notes.

Goodman started by saying he was at first interested in “taking literally the way certain currents of electronic music culture were describing themselves using military metaphor,” for example, Underground Resistance. But he found most was an outpouring of male fantasy and conspiracy theory. Then, he turned to non-lethal weaponry, which is now essential in an overexposed world with real-time televised events.

“[It’s an] arms race in which the opponent is the general population,” Goodman said, noting microwave pulses that can modulate behavior without supposedly lasting effects or visible traces. In his definition of a sonic weapon, it’s something that can cause modulation of feelings and behavior, be it violence, pain, seduction, trickery (advertising!), deception, unease or fear.

Most politics of music, he said, deal with content and language, text that can be deconstructed and lyrics that can be reinterpreted. More fundamental is how sound and music affects and modulate the body and mind, but not always consciously or representationally, part of the “vibrational relationships between things, sometimes humans,” as part of a continuum of vibrational forces that have been colonized by different groups.

Military research into acoustic weapons tends to focus on to repelling people, dispersing crowds and essentially making a group into individuals. Seduction indicates branding, to induce consumption behaviors and to get people to buy things. In music culture and sound art insidious frequencies to attract crowds, bring people together.

So we have forces of repulsion and forces of attraction.

Goodman then moved on to the origins of sound produced in the military, as a fanfare to call to arms, and drumming to discipline the troops in time: a soundtrack to war.

He went into the Urban Funk Campaign and Operation Wandering Ghost ((From WFMU: “The Urban Funk Campaign is something much more evil. It was employed by the CIA Audio Harassment Division in Vietnam and Laos. The idea: bombard the local citizenry with sound instead of bombs. The desired effect: rouse the populace from their hideouts and destabilize their resolve.

In 1972, 13 choppers were equipped with Sound Curdler Systems (costing $50,000 each). The Curdler is a small oscillator unit that is capable of hundreds of hours of uninterrupted operation from a simple 9v. battery. It emits a shrill pulsating shriek at 120 decibels at 10 meters. (Standing on a runway during takeoff of a 747 measures 112db, in other words, potential aural harm.)

The system is also called a “People Repeller” when used with a hand portable US HPS1 Public Address System with a 350 watt amp and anti-feedback microphone. This system delivered intelligible speech over 2.5 miles. The system also came with an optional siren system with built-in wail/yelp audio frequency oscillator with adjustments to frequencies from 500-5000hz.

Code-named “Wandering Soul” because the audio engineers spent weeks recording eerie sounds based on their exposure to local music, foklore, ghost stories. The eerie sounds are similar to the soundeffects employed during a radio mystery play, but transposed to live theatre of Vietnam. These sounds were intended to represent souls of the enemy dead who had failed to find the peace of a proper burial. The wailing soul cannot be put to rest until this proper burial takes place.

The purpose of these intrusive sounds was to enhance panic instincts and facilitate crowd dispersal and the disruption of troop strategies, village chanting, rites, routines, and celebrations. The target audience (victims) are forced to drop everything to cover their ears. At night the system was at its most effective as it harassed the sleeping and preyed on the sensibilities and superstitions of the target population. It was further intended to destabilize beliefs, disorient the human targets, and enhance intra-community irritability.

The 10,000-watt airborne systems were mounted on the choppers so as to best project sound downward in a pyramid apexing at 3,500 meters altitude. This was the technological heart of psychological warfare.

In 1973 the Urban Funk Campaign tested super/sub-sonic and ultra/infra sound with a weapon system called a Squark Box which creates 2 simultaneously inaudible ultrasound tones at pitches of 16 and 16.002khz. These 2 ultrasonic waves of highly directional beams are aimed to coincide at the target point. This interference pattern creates a sub-beat of 2hz outside normal auditory perception and when played at immense volumes causes ars, shoulders, chest wall and buttocks to resonate. It converts the target body into a human tuning fork. Symptoms include headache, visual distortion, epidermal tinglings. the skin actually gets heated by localized ultrasound and gently cooked.” Other effects are the formation of cavities or bubbles in the body, choking, excessive salivation, testicular pain, nausea and giddiness - a technological extension of witchcraft. And when combined with rapid flickering hi-intensity lights it caused systematic disorientation, sensory destabilization. Prototype for the modern dance floor where for an admission price, revelers willingly submit the ennui of their everyday bodies to the photo/auditory-epileptic effects of intense stroboscopic light. Synchronized at between 10-30cps - photoepilepsy will occur during intense prolonged conflict exposure.“)), two Vietnam era projects to experiment with sound in battle, and talked about the ghost army the allies set up in World War II.

Goodman then went into his three definitions of “unsound”–that is, having suspect methods, “politically unsound”, below the threshold of hearing, or most interestingly, things you can’t hear because they haven’t been created. “The potential between the vibrational field, what futurism in music culture has always been intereted in, the shock of the new.

This leads to an interesting premise: “what a body can hear is not something that is fixed in time.”

Hearing aids let us hone in on certain frequencies, hi-tech prosthetics. “We don’t yet know what the sonic body is capable of.”

Much of the talk around sonic warfare (that isn’t waging it) consists of debunking military press releases, according to Goodman, and names Dr. Jurgen Altman as a leader.

Most effort in that field is involved in directional ultrasound, things like sonic lasers. Rather than use sub-frequencies (like Goodman and many musicians) the military tech focuses on directional devices that create hole-y space, and pockets of audition.

He talked about how military technology trickles down, as of the case of the vocoder, initially a speech encoder so Roosevelt could talk to Churchill. Then came two great quotes, that I may have mis-attributed, or under attributed in my notes; I have “Kintler”. Anyway, the quotes are (on seperate lines because they’re great):

All entertainment media is an abuse of military media.

The discoteque was a boot camp for World War 3.

The latter meaning it was subtly improving our nervous systems to function in a situation of sensory overload.

He touched a bit on the Mosquito, post-9/11 urban culture and its pelethora of sirens, the LRAD, playing Balinese gamelan on the greatest soundsystem known to man and studying the brain’s response, sonic booms and sonic warfare as war crimes, the monopolization of the means to experiment with frequencies, schizophrenia as “split voice”, Project Jericho and more.

Goodman’s keeping a blog on various topics related to the book here. You can preview it on Google Books.