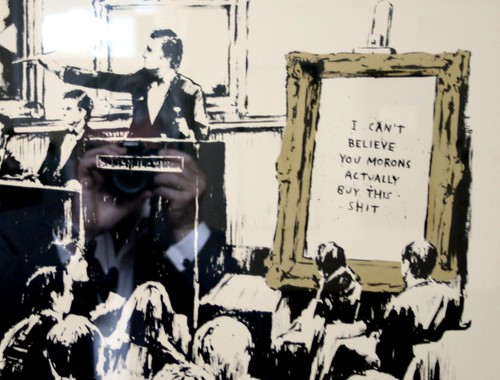 Banksy “I can’t believe you morons actually buy this shit” at the free exhibition of his work in Covent Garden, originally uploaded by pomphorhynchus.
I caught a screening of Exit Through The Gift Shop, Banksy’s feature-length film, last night, and, like most things related to the mysterious artist, it manages to zig around expectations and get to mind-twisting territory quickly.

There are probably a few spoilers in here, or not. Read at your peril.

Plot-wise, the movie mostly stars a Frenchman named Thierry Guetta. Thierry becomes obsessed with chronicling things via video, and fixates on street artists, adoring of the danger and spontaneity.

Thierry is clearly obsessed and mentally unbalanced, but in that endearing Man On Wire, French way. His marriage miraculously stays intact while he follows Shepherd Fairey across the globe, plowing through thousands of tapes–ostensibly, to the artists, for a documentary–which fill dozens and dozens of boxes in his house.

Theirry’s camera eventually, after much pursuit, intercepts Banksy, and several close scrapes bring the two together, as friends. Theirry gets comfortable in Banksy’s inner sanctum. Only in this short section do we get to see the artist working; otherwise he narrates in hood, face obscured, with robo voice. Scenes from his studio are really interesting; at one point he takes Theirry to his attic and shows him boxes of £10 bills, with Lady Di’s face printed on them, and explains how they printed £1,000,000 worth and have been passing them to vendors at festivals.1

At various points in the film, the question of whether Thierry is real or not came to mind. It seemed, thematically, that his obsession with videotaping everything melds perfectly with the themes of surveillance and voyeurism prevailing in Banksy’s work. But the dating of the footage appears to have been too elaborate to fake. Fairey looks younger, wearing baggy, of-the-era late ’90s clothes in footage purported to be from that era. Speaking with a few people more familiar than I, it’s true, he’s a real guy. Guetta’s character, though, is so surreal and outlandishly appropriate to the subject matter, that what happens next is completely conceptually seamless to the point where the rational mind rebels.

Banksy asks Theirry to show him his film, Life Remote Control, and, surprise, the final product of his insanity and obsession is intolerable. You can watch a few bits of it here.

So Banksy decides to make the movie about Thierry, and, in the meanwhiles, tells Thierry, who has been experimenting with stickers and wheatpasting, to do an art show–and Thierry dubs himself Mr. Brainwash.

Given this mandate by his hero, Thierry can’t help but make it massive: he puts his life in hock (supposedly) and hires a team to create art (a style-less mish-mash of Fairey, Banksy and Andy Warhol) and leverages endorsements from Fairey and Banksy to get the punters (Fairey calls them suckers, which is maybe more appropriate) out and buying.

And they do. His Life is Beautiful show sells a million dollars in product and runs for months (I wasn’t able to independently verify
this). Theirry is an art star, and has had a subsequent show here in New York in February.

And there we have it. But what do we have? Well, the great street art swindle. Like John Lydon said, ‘Ever get the feeling you’ve been cheated?’

The Sex Pistols did it first. The KLF wrote The Manual on how to do it. Now Banksy is doing it: creating a story to spur demand, lending authority to it in a rapidly popularizing subculture, satisfying the hunger and laughing while everyone eats it up.

It is almost a performance edition of the piece pictured above.

Thierry’s the ultimate idolator, a King Toy of the graf world, but in an endearing, ‘let me hold the ladder and learn to do it’ savant-ish sense rather than cynical or ill-meaning way.

In him, Banksy has a tool to make us aware of our desire to belong and understand, nudging him forward, enabling his rise, only to gloat over the result. The art fans, clad in Ed Hardy, lined the sidewalk to see Life is Beautiful and take home a piece. But once everyone catches on to the gag, what happens to the work? And Thierry’s (clearly unbalanced) ego? If Banksy was affiliated, does that mean it has value (in an artistic or financial sense)?

Banksy is certainly a fascinating character, and this film will raise more interesting discussion on the nature of art in our times. But as opposed to his pieces on the wall in Gaza, indicting a system of oppression and bringing power and hope and positive messages to the world, and the Disneyland incident (which is explained in harrowing detail in the film) it feels like there’s been a turn in Banksy’s work toward the cynical.

Here, in helping make Mr. Brainwash into something of a star, he’s turned to lampooning the general public, ordinary people whose minds have been opened to the sort of surprise and wonder great street art fosters.

The film is out April 16 in the States, and if you’re interested in the culture of street art and image-making in cultural affairs I’d recommend you seek it out.

Animal New York has a post revealing some Fairey admissions, and that throws up a few good rumors and explanations about Theirry owning property and having family connections that let him do legal graffiti. It’s worth a look.

Nick Parish is a writer and editor based in the Pacific Northwest. View all posts by Nick

1 thought on “Banksy’s Exit Through The Gift Shop”